It has been an eventful week and weekend. The Republican convention with its fireworks, the Russian school hostage standoff and tragedy, and hurricane Frances all have made their mark. Each of these events affected me and my family in different but important ways.

Republican convention. I make no apologies for the fact that I dislike John Kerry and have since the early 1970s when he acted dishonored and possibly treasonably toward his military duty (he was still a Naval Reserve officer) while leading the veteran segment of the anti-war movement and later as senator appeared to do everything possible to hinder a full accounting of our Vietnam POWs. I served in the Air Force during Vietnam and my younger brother, a 101st Airborne graduate of Ranger School, died in Vietnam. While I understood some of the dissent over the war, much of it was dishonest, self-serving rhetoric that reflected nihilism rather than life, and cowardice rather than strength and honor. I came out of the service right into this milieu in college and saw firsthand the duplicity and dishonest manipulation for personal aggrandizement of much of the anti-war movment.

That said, of all the speakers, I most connected with Zell Miller. During my early years, I lived in a small rural mill town in central South Carolina, which at the time still held many of the best traditions of the antebellum South. While I spent the years after fifth grade to the north (Pennsylvania, Ohio, and Maryland), I will never forget the geniality and dignity of good southern men, like my great uncle, who, even when they disagreed with you, did it with principled graciousness. It took a lot to rouse those men to express public anger the way Zell did, and I fully understood his sense of betrayal and his need to speak his mind as honestly as he knew how. The fact that he gave voice to my own feelings, with a cultural context I had long respected, resonated cords of memory I had long forgotten.

However, the convention also saddened me. As I remembered the past and looked at the reality of the future, I could not believe that the Democratic Party had nominated such a flawed and self-serving individual as Senator John Kerry. Yet, as I looked at possible candidates, even beyond those who exposed themselves in the primaries, the only person for whom I could muster any significant respect was the unelectable Joe Lieberman. Having watched the primary run-up to this year’s presidential race, I could sense the despair of the Democratic side of the aisle as they attempted to find somebody, anybody they could run against President Bush, who despite the paucity of viable challengers, appeared exceptionally vulnerable. It was almost as if Kerry was the best of a bad lot.

However, it is said that moments of destiny reveal the man, either the hidden strengths that flower into new greatness, or hidden demons that take one down. I am saddened for John Kerry. It is seldom we are given such a significant opportunity to claim true greatness. John Kerry had his chance, his opening to become something more than his past, to even use that past as a strength, a learning ground that would temper his soul and stretch his character into something sound and noble going forward. That was his best hope, his great opportunity. However, he reached that nexus point and chose, at least to my way of thinking, a jingoistic rewriting of the past in an effort to cast an imaginary future. Called to greatness he opted for a facsimile, a facile substitute both superficial and too clever by half. To use a old image, he has been tried in the fire and found wanting. That is not something to rejoice about. It is something to be saddened over.

Update: It gets sadder by the day. 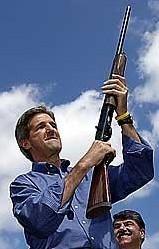 How does one comment on this weekend event without responding in kind? The intentional implication is unbelievable coming from a senator and presidential candidate. God have mercy.

“In West Virginia, Cecil Roberts, president of the United Mine Workers of America, gave Kerry a rifle as a gift. Kerry, a self-described gun-owner and hunter, quipped: ‘I thank you for the gift, but I can’t take it to the debate with me.‘” [Emphasis added]

2 comments for “So Many Things: Part I”