The Internet, while often called a vast wasteland, confounds that appellation because it contains so many surprises, so many astonishing and bizarrely encapsolated minutia, most of which are found serendipitously (like most of the fun things in life) at least for those of us with a sense of adventure given feet by our imaginations. Many of the Internet’s surprises are on sites that depend on its technology to conduct their business such as Amazon.com. Amazon has lots of hidden gems, but one feature called Listmania allows anyone registered with Amazon to create a list of items that can be bought on Amazon.com. Listmaina has become extremely popular with Amazon users. It began life simply as a means for people to recommend books to other users of Amazon. Now, there are untold thousands of lists of books, as well as lists on anything you can purchase on Amazon, going from personalized top ten lists to the best items in given category or covering a specific subject area. Taking advantage of the growing phenomenon, Amazon even keeps a list of the top Listmania lists, as voted by those who access them.

Currently, the number two Listmania list is The Top 25 Weirdest Items You Can Purchase Through Amazon! by Sheila Chilcote-Collins, who calls herself an “Ardent Seeker Of Oddities”. As of this morning her list has been read an astonishing 64,465 times.

While some of the items Sheila lists are truly bizarre (Owl Puke – both book and sample), one brings back childhood memories. Number five on Sheila’s list is The Extreme Ant Farm. I remember having as a child one of those wonderful ant farms that used two pieces of parallel plastic to force the ants to build their nest vertically and visibly. I spent hours watching them going about their lives. Well, Amazon lists three ant farms, including a GIANT Ant Farm from Toys ‘R’ Us. But in keeping with the current popularity of all things “eXtreme” how could one not want “The Extreme Ant Farm shown below? Fairness alert: I get a small percentage from Amazon when anyone orders an ant farm from these links. 😉 Enjoy. 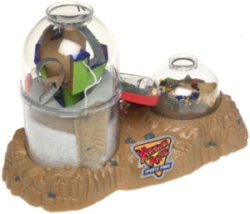