It has been one year since I began prospecting beyond the rim. Some of you may not know it, but this site is my second attempt at keeping a web journal. My first effort started on my personal site (william.meisheid.com) and lasted for almost a year. But managing the regular postings by hand with FrontPage got to be a real chore, especially the history part, and I let the effort die. Then, about a year later, with the encouragement of a faithful friend (thanks Keith!) I began again, this time using real blogging software (WordPress). Getting that software up and running was an adventure in itself, but after several months of tweaking the site settled into what you see today. To understand a writer/blogger, it helps to understand how they see their site, where they work, and how they get away from the black hole of their keyboard (more about that later).

Yes, the appearance of Beyond The Rim… is relatively simple, almost retro, and at various times I have been tempted to make it look more professional, more modern, or just a little cleaner, but in the end I have left it alone. Now the software needs upgrading to a major new release of WordPress and the CSS (cascading style sheet) really needs to be cleaned up. There are also a few new functions that would be good to add in, so when I finally take that upgrade plunge, the site may get tweaked a little bit. If you have an opinion on this I am open to suggestions and critiques.

While I believe the use of Saturn through the window of my graphic is obvious, I have been asked about the choice of a Monk sitting in his cell, toiling away in the near dark. Well it is closer to reality than you might think, except maybe the dark part, though I don’t like working in bright light. My workplace is a small 11′ by 12 office on the first floor of our home that is crammed, and I do mean crammed, with books and equipment. Of the 46 linear feet of wall surface, 3′ in the northwest corner is taken up by a pocket door. The actual door is an old (late 1800’s) oak door that I got at an auction. The door intersects a 6′ section of the wall adjoining the corner that holds the built-in whiteboard. 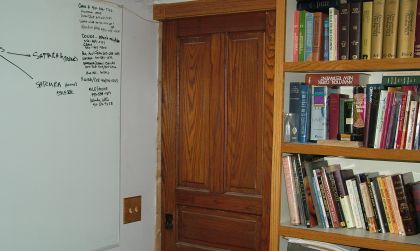 The remaining upper half of the room’s wall space is taken up by bookshelves and way too many books. Oops, a bibliophile can never have too many books. Did, you ask, make the bookcases? Yes, I did. Both my sweetie and I love oak trim. 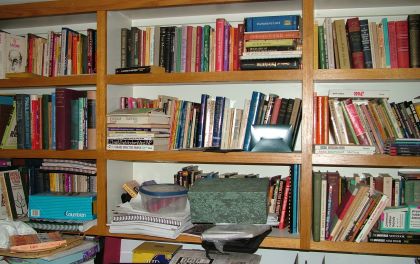 My primary workspace does have a window, but rather than a portal to celestial wonders it lookes out on God’s greenery and our winding road (see this winter picture of what can be seen out my window). So during the daytime I do have natural light. As you can see below, the lower half of the wallspace has counter/desktop space which extends for over 34′. Underneath are cabinets, storage, wires galore, and Sophie’s kennel. She lies in there most of the time when I am working, while our Akita keeps watch just outside my entryway. The book you see next to the laptop is a book on ancient Egyptian boats, which is research for my Moses series. All in all my wife considers this place my cave and as to the monk, well she thinks I would have fit nicely into the Middle Ages as the Sean Connery character, William of Baskerville, in The Name of the Rose, a fine movie adapted from the novel by Umberto Eco. 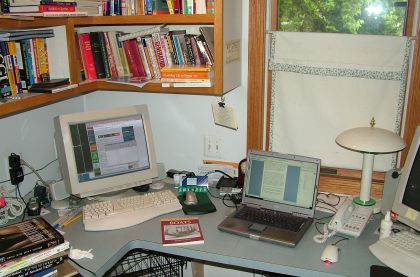 When I need a break from my “cave”, the gravitational pull of my keyboard, or just feel I need a little sun or fresh air, Sophie and I cut the grass in the back yard. She loves to ride on our laps as my wife and I take turns doing the mowing. It is not easy to tell from the picture but I like to cut the grass in a circle pattern, discharging the grass ever outward. It leaves a nice ringed effect on the lawn. 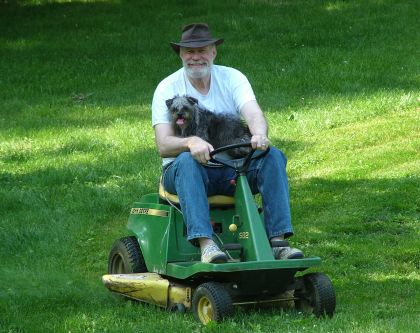 Thoughts on What I Have Learned

This is not the first time I have expressed my thoughts about blogging or this site (e.g. see here, here, and here). You can look at those postings for some insight that I won’t repeat here.

Before I started blogging I never used to think that my keyboard possessed its own gravity well, but I now know that it does. For most people keyboards are like a trip to light gravity planet, their keyboards exert very little pull, so unless they are extremely close to the multi-capped surface, say less than a foot and for some people less than a few inches, their hands are not drawn to the rows of keys. However, most writers, and I have now found this true of myself, are heavy-worlders. They have to be, since their keyboards exert at least 3 or 4gs of gravitational acceleration. Whenever they are within the gravitational pull of the QWERTY planet, which from experience seems to extend out light years in every direction from its actual physical location, they invariably end up Isaac Newtoned to their keyboard (he discovered gravity ;-)).

As a Christian, I believe the only gravity well I should be under the influence of is God’s. I have had many discussions with my heavenly Father about the QWERTY gravity well. His answer has been pretty simple. All gravity wells are opportunites, chances to fight against things that draw me away from him. He told me there are an infinite number of gravity wells and people are creating new ones at a remarkable clip. He told me that I have a choice, much the same choice given to the ghost carrying the little red lizard on his shoulder in C. S. Lewis’ story, The Great Divorce. We need to let go of them like he let go of the lizard. We have to let God rip them from us, transforming them for his service, making them servants rather than masters, as the lizard was transformed into a beautiful stallion the man was able to ride into the Kingdom. Or, if we resist the pain and struggle of being freed, we will be forever bound to their infinitely increasing gravity until it finally crushes everything of what we used to be into the black hole of nothingness.

I have struggled with letting go, with letting God rip the QWERTY planet’s gravity from my universe. Here is the strange part; at least this is how I have experienced it. In the 1800’s the holiness movement sought a breakthrough moment, an instant when you would be freed from sin, when you would arrive at a prayed-through transformation, similar in many ways to the transforming moment in Lewis’ story. However, Lewis’ story occurs on the outskirts of heaven, after death, and it illustrates his vision of the final struggle for some people’s souls. At that moment, the choices are eternal in character, absolute and final. Here and now, despite that pull out all the stops hope of the holiness advocates, our choices generally are not. Instead, they get tested again and again over time. We have to choose God again and again, moment by moment, day by day. So even when I let God have his way and he removes one of my problematic gravity wells, I still have to make the right choices in the future not to create the attraction of that well all over again.

Lets get back to this blog and my writing. I want to use my creative abilities in the service of the Lord and that is a right and true and noble thing to do. But I also need to be willing to give them up tomorrow, forever, if that is what God asks of me, since nothing I posses is anything more than Isaiah’s filthy rags compared to what God wants for me. Anything held too tightly becomes an obsession, a gravity well, and instead of enriching our lives and service to God, it begins exerting its pull and eventually draws us away from him in some way.

So, of all the things this blog has meant to me, taught me, demanded of me over the past year, one thing stands out. It is only a tool, a means to an end that God must direct or it will mean nothing, be nothing but an unrighteous gravity well, drawing me away from God and his plan for my life.

Using tools properly requires balance, perspective, and knowledge, but most of all, lightness of grip. That is my struggle: to grip and be gripped lightly. What is yours? Is it your ministry, your family, your job, your talent, your wife or your husband, or maybe it is just your sense of having the right to make your own decisions and choose your own path. We all have our own gravity wells. They are infinite in variety and unlimited in expressing their demands, but they all have one thing in common: no matter how right and true they were at first, they now exert more pull on us than God and that needs to be dealt with.

I want to thank you for reading my site, but I am now going to make a suggestion no writer really ever wants to make to a reader. I want you to make sure that I never become a gravity well in your life (yes it is highly unlikely, but). Better for me to lose you as a reader than to become part of a problem between you and God. And I humbly suggest you apply that to all blogs and the reading of them, as well as all books and the reading of them (and that from a bibliophile!). Heck, apply it to everything in life, for Pauls famous words in Romans 8:38-39 cut two ways:

Nothing, including no gravity well, can separate us from the love of God. Dont even give one a chance to try. Hold onto all things with a light grip, except God himself. Hold onto him for dear life and let nothing get too firm a hold on you, except God and let him hold you with all his might. There, that sound’s like a plan.

May God bless you and keep you, may his face always shine upon you, and may you always move freely and with a light touch to his honor and glory.

6 comments for “A Blog’s Life”