Last year I spent the last weekend in September with my dad in South Daytona, Florida experiencing the edge of Jeanne, my first hurricane. I wrote about that in Bill’s Excellent Adventure. Today, even though we were supposedly far enough north that we should not have gotten any signigicant damage from Wilma tracking to the south, we lost a massive tree in our front yard, which by the grace of God missed our house.

While heavy rain and 30+ mph winds coming in from the ocean (slightly from the southeast) buffeted outside, my dad and I were watching news on hurricane Wilma in the Florida room in the back of the house. Suddenly a huge gust of wind shook the windows, immediately followed by a loud whump! At first I thought the new front door I had installed last week had blown open, but as I turned the corner and looked out the triple window in the living room I saw that the massive tree (4+ feet in diameter) in the front yard had fallen along the front of the house. Even though the gust had come off the ocean, blowing west/northwest directly into the front of our house, the tree fell 90 degrees off the gust missing us except for a brush against the roof edge. 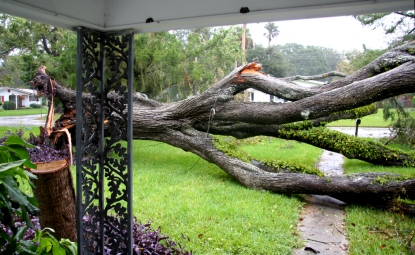 The tree skimmed the edge of our roof and the top struck the motor home next door. I immediately went over to help our neighbor assess the damage. He got out his chain saw and we cut away the branches from around his vehicle. After we got everything off the motor home he climbed up on the roof of the vehicle and discovered six holes in the roof. The rain was still pouring down and the rubber tape he had for sealing leaks wouldn’t stick. Fortunately a few days ago I had gotten a gallon can of Wet-n-Dry rubberized roof sealant that is designed to allow you to seal leaks even in the rain. It did the job and sealed all of the holes, even the one that had a piece of branch still embedded in it and wouldn’t pull out.

Soaked to bone, I returned home to change and call a few family members and friends to let them know what happened. I thank God for his gracious mercy. Even though the gust came from the east/southeast, which should have forced the tree directly onto our house, instead it fell 90 degrees off axis and landed to the south.

After the rain stopped I took out my camera and photographed the event, including the roots of the tree. I think what saved the house was the fact that the roots on the southern side of the tree held and twisted the tree as it fell, before finally breaking. 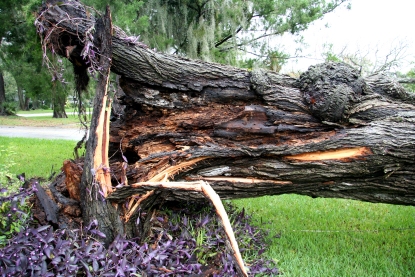 You can see from the next picture how close the tree came to the edge of our house. Fortunately we had previously removed a major branch that had hung over the edge of the roof. 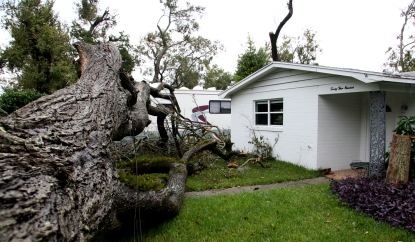 This view from across the street gives you an idea of how big the tree actually is. This was a massive tree that had the potential to destroy our house. 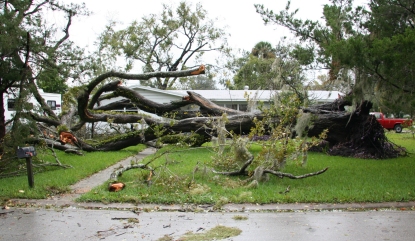 The rain has stopped and the sun is peaking through the clouds now. The winds are diminishing. The real work will soon begin as we have to cut up the branches and body of the massive tree. My brother is searching for our homeowners policy so we can get them in gear and take care of repairing our neighbor’s motor home and remove the huge tree trunk. We have already had several tree services stop wanting to take care of removing the tree. But nothing can be done until the insurance adjuster sees the tree and damage.

I want to make sure I thank the Lord for his gracious protection and I ask that God is merciful on those whose damages far exceeded ours.