The adventure continued today as the yard was finally cleared. But let’s back up a bit and tell the story that followed my last post. As you know, while experiencing the fringes of hurricane Wilma on Monday morning, the massive elm tree in our front yard came down, by what appeared to be a microburst. However, on further investigation it might have been a small tornado as there was intermittent damage in a line leading away from us, including the shearing off of the top 20′ of a tree two doors away and the downing of three connected electric poles about a quarter mile further on. Nothing else was damaged around any of the three incident points.

Tuesday, our neighbor began cleanup of the branches that fell on his property and damaged his motor home. We began investigating approaches to deal with the massive amount of wood spread out across our front yard. My nephew came over and took advantage of the moment to play a little Tarzan. Note: to see larger photos (1024X683) click on the images below. 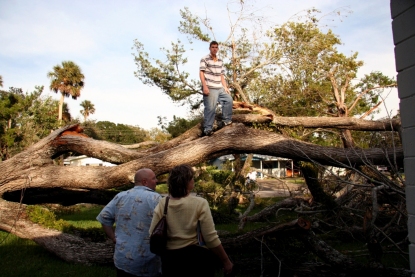 Since my brother had Wednesday off (he is a postal carrier), and a neighbor had offered several chain saws for our use, we decided to begin tackling the monster. We made good progress through the morning, but it was quickly draining our energy reserves. 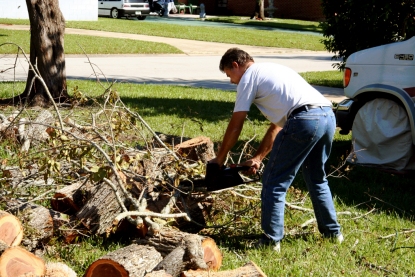 Despite the energy depletion, we were making headway. Our 82 year old father began hauling off the smaller pieces to front curb. The county will pick up any storm damage wood cuttings the week following a storm, as long as it is less than five feet long and you get it curbside. We figured we could let them deal with a large portion of the cuttings. 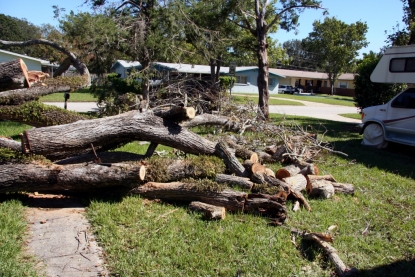 After a break for lunch at the local Firehouse Sub shop, we decided we needed help to finish. Our saws were too small to deal with the really big stuff and we were quickly running out of gas, despite the Firehouse refill. I contacted a small local tree guy, Ed Eiley, who was willing to work hourly and he joined our efforts about 1 p.m. It was an added bonus that he was a fellow Christian and prayed that Jesus would send his angels to protect us from harm (and broken bones). 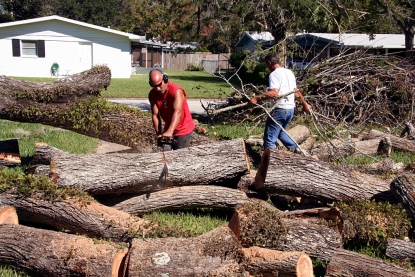 Elm is a hard wood and Ed had to resharpen his beautiful 28″ Stihl five times during the course of the afternoon. 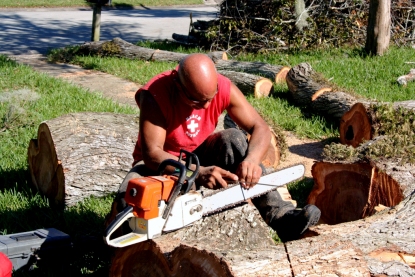 That big saw came in handy when we began tackling the large pieces and it would really throw out the chips. 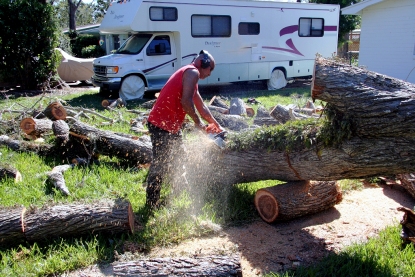 But it really showed its stuff when we dealt with the main trunk, the really big pieces. It would only cut half of the way through, still leaving about a two inch section in the middle that had to be broken apart. It was hard slogging work, but with the aid of rope and the truck we were able to break the main truck into sections. 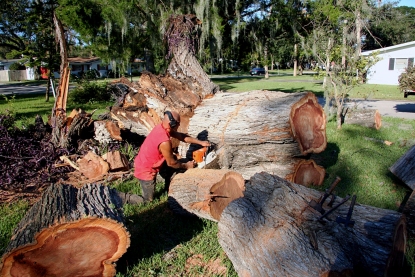 We ended the day with the tree cut up into pieces, some of which were too big to move, but with a feeling of a good day’s work done. Tomorrow we would have to decide how to get rid of the big pieces and deal with the stump. 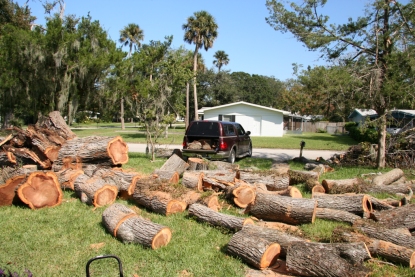 We thanked God for no injuries and only a few aches and pains. God is good.