My original plan was write this post yesterday, but my daughter’s Father’s Day gift did me in (literally) and the aftereffects continue to do so for much of today.

It all started out with church with my daughter. Afterward, Sarah, myself, and three other members of her care group (answering an invitation to “share a dad” – 2 guys and a gal) got some takeout and went to a local park that borders the Potomac River for a picnic and a hike. Yes, a hike. This was no ordinary hike. It was on a trail that runs parallel to the Potomac River called the “Billy Goat Trail”, and for very good reason. The trail is probably 85% rocks: on, over, up, and down rocks for almost 2.5 miles. I estimate the whole hike close to three miles. 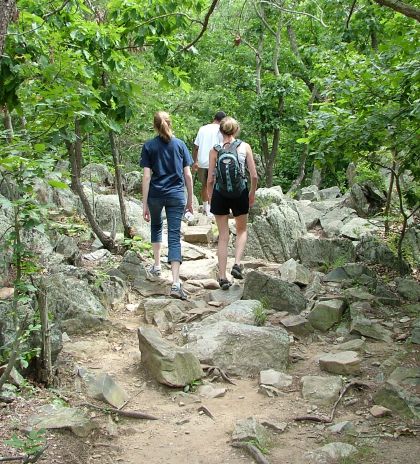 Starting out on an unique adventure.

My companions were all in their mid-twenties and I am 58. My daughter is the blonde with the pony tail on the right. The last time I did any serious hiking was in 1998 in Australia when my wife and I did some hiking in the Blue Mountains west of Sydney. This time my wife wisely chose not to go along.

My daughter told me I would sleep well that night. I replied that just so I didn’t sleep the eternal sleep that was fine with me. My original plan was to take lots of pictures along the trail, but very quickly it became a challenge just to complete the trail and the camera stayed in the bag for the most part. 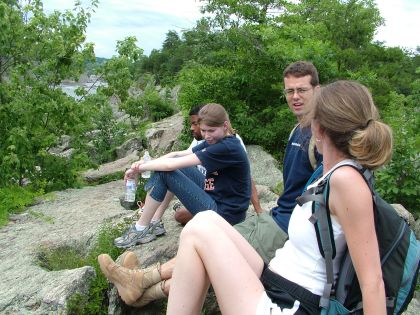 Our first rest point along the Billy Goat trail.

The young ones kept offering to turn around or at about the midpoint to take the escape route, but I said I intended to finish the quest. It became important to get to the end and before long it focused down to a test of wills between me and my body, especially my legs, which several times began to rebel, once starting to cramp up. We brought along plenty of water but what I really needed was glucose and electrolytes so next time, yes I am planning to go back, I will bring Gatorade and orange juice rather than water. 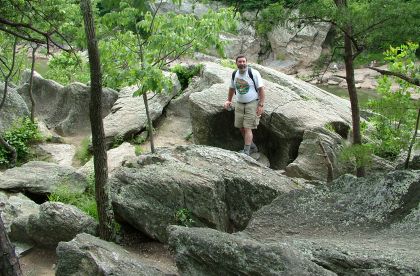 We passed this other hiker making his way along the trail in the opposite direction. This should help give you an idea of the the extreme rockiness of the trail. 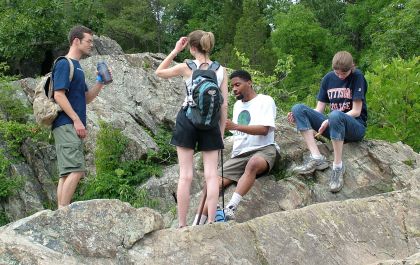 Our second rest point and a place to take some pictures of the Potomac. 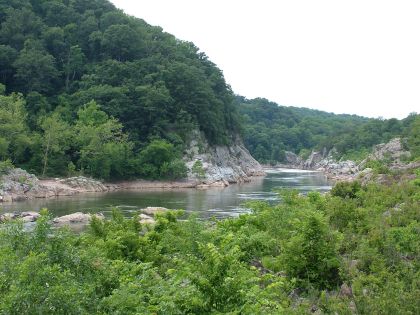 View up the Potomac River from the Billy Goat trail.

It eventually got so that my legs were not cooperating and I began to wonder if they could get a helicopter in there to take me out when I fell and broke every bone in my body. There are rocks everywhere as the following picture of a feeder streambed leading into to the Potomac shows. At this point we were turning away from the river and beginning the last mile or so. 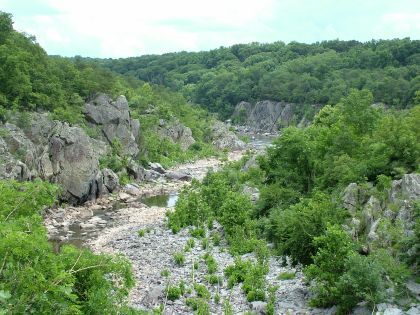 A feeder streambed emptying into the Potomac river.

There were a few times when I did wonder if I would make it, but I remembered Paul and put my hand to the plow (my Australian Tasmanian oak walking stick) and lumbered on. Toward the end the rocks mostly gave way to a dirt trail and it was a little easier. At least you didn’t have to concern yourself so much with your balance and trying to avoid falling. The other side of that last quarter mile or so was with being so exhausted you experienced that strange phenomena of time elongation in which the remaining distance seems to diminish in half-lives, making you think that you would never get to the end of this adventure in purgatory. 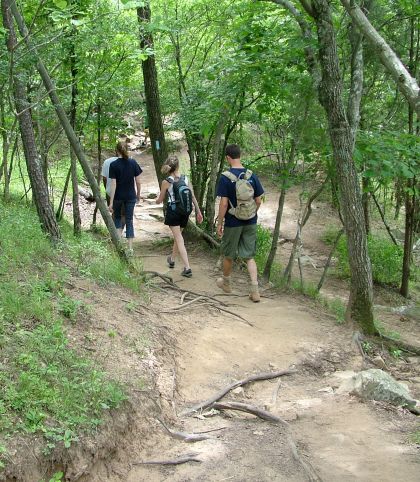 Nearing the end of an exhausting hike and being thankful for DIRT instead of rocks.

This afternoon I could hardly move, with only my arms not outright rebelling. My sweetie has been wonderfully sympathetic, but this is something I will have to work through. Remarkably, the plan is to do the trail at least three more times this year. So, I will need to get in a lot better shape to make it less of titanic test of will, though those struggles are good for you to experience from time to time.

On the way back, to drop off the others, the two guys in the back seat, to the chagrin of the poor young lady sitting next to them, started to sing to some of the music my daughter was playing on her sound system. Her car is a 1988 Cadillac Brougham, which my daughter got from a little old lady in Catonsville. It had 38,000 original miles and was the top of the line for the time, with plush leather seats and all the accessories. She calls it her “Little Pig”. She likes to give her cars nicknames. Growing up her nickname was Piglet (the Winnie The Poo character) and since the car is a gas pig it was a fitting name for the vehicle. Well Little Pig was really rocking as the guys in the back seat started singing the words to Jesus Freak by D. C. Talk. They were bouncing up and down, swaying left and right, and singing with all the gusto they could muster. I wonder what the other drivers on Route 295 thought as that big old caddy literally bounced down the expressway. My digital camera has an excellent movie mode so I filmed about two minutes or so of their rambunctious behavior, complete with decent sound. So, as Fox Mulder used to say, the truth is out there.

It was a fitting end to an eclectic and wonderful Father’s Day. I love my daughter very much and for a magical and challenging afternoon her gift was to make me part of her world, something fathers don’t often get to experience with grown daughters. Thank you Sarah.

4 comments for “Father’s Day: A Retrospective”