Today is Flag Day in the United States. The purpose of the day is to commemorate the adoption of the official flag of the United States, which happened on June 14, 1777, by resolution of the Second Continental Congress. In 1916, President Woodrow Wilson officially proclaimed June 14 as Flag Day and in August, 1949 Congress made it official. It is not a national holiday and only Pennsylvania made it a state holiday.

Historically Christians have been divided over issues like patriotism, flag-waving, and other symbols of national pride. However, even the Apostle Paul spoke with honor of his Roman citizenship, so at the very least every American Christian should speak with honor of his American citizenship. Whether you “show the colors” today or not remember the words of Peter.

The Lord wants you to obey all human authorities, especially the Emperor, who rules over everyone. You must also obey governors, because they are sent by the Emperor to punish criminals and to praise good citizens. 1 Peter 2:13-14

In honor of our flag, “Old Glory”, I give you the famous picture of the raising of the flag by NYC firefighters over the rubble of 9-11. It was taken by Thomas E. Franklin of The Record of Bergen County, NJ and will forever be a lasting image of courage and hope under duress. 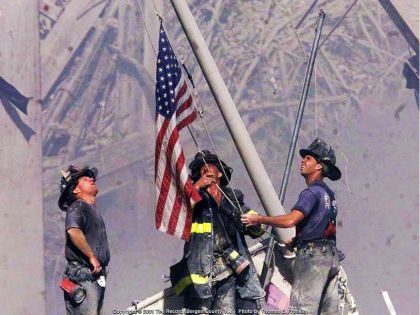 May the Lord bless you and keep you, may his face shine upon you and may the governors of our land have cause to praise each and every one of us as “good citizens.”