In 1 Corinthians 3:10-15 Paul talks about building on the sure foundation of Christ with that which endures, not wood, hay or stubble that will burn up when tested by the fire of God. In astronomy there are bodies called nebulae (interstellar clouds of dust, gas and plasma). These clouds sometimes become star nurseries, because when they are large enough, they collapse in on themselves (force of gravity), forming new stars.

However, when a dust cloud gets too close to a powerful star, its intense radiation burns the dust. As the dust burns away, the radiation of the star reflects back for us to see, hence these are called reflection nebulae. This particular nebula is only .06 light years from the very bright Pleiades star, Merope and its intense radiation.

In this image, Merope is off-image in the upper right corner, but its rays (created by an optical phenomenon in the Hubble itself) extend powerfully down into the nebula, consuming its dust particles, much as wood, hay and stubble are destroyed by the intensity of God’s presence.

Psalm 19:1 “The heavens declare the glory of God, and the sky above proclaims his handiwork.” 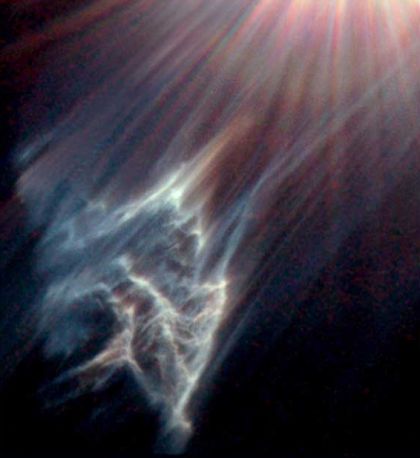 Note: After last week’s find, I was inspired to take another look at the Hubble images. I am not sure how long this series will last, but as long as the heavens declare the glory of God and Hubble shows us his handiwork, I will make an effort to post something new each week.