I was searching through a storage drive for a lost photo and I found this Hubble picture that I never included in my earlier series “Hubble Tuesdays”. It is so beautiful, I just had to post it, even though the series ended over a year ago.

Biblical theology talks about the demise of the current creation in fire.

…waiting for and hastening the coming of the day of God, because of which the heavens will be set on fire and dissolved, and the heavenly bodies will melt as they burn! 2 Peter 3:12

This Hubble picture captures the Bug Nebula (NGC 6302), which is one of the brightest of all planetary nebulae. The nebula is centered around a dying star, heated to white hot with its radiating gases smothered in a blanket of hailstones.

Some have called the nebula a cosmic butterfly, a creature which early Christians thought exemplified the born again experience of new life in Jesus Christ. In the bottom left of the image is a formation reminiscent of a bird looking at the moment of birth, which for Christians would be the Holy Spirit overseeing the new creation process.

So for me this Hubble image calls to mind not demise but birth in fire and ice, the reborn soul touching the Hand of God. 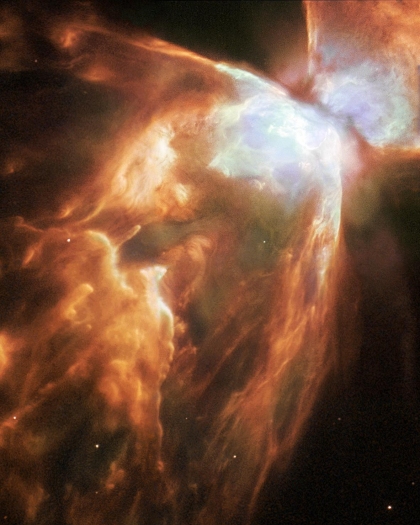 1 comment for “Hubble Tuesdays: Demise in Fire and Ice”