If you live indoors you eventually have to deal with dust bunnies, those amorphous collections of dust that congregate in the corners of rooms, around the edges of furniture, and are regular visitors to homes of those who have dogs and other furry animals. They are very difficult to clean up since they are so light they float away from brooms and the air currents around vacuums often push them away before they can suck them in.

There are also spiritual dust bunnies. They are the little things that collect around the edges of our religious lives that we know we should deal with, but they are difficult to get a handle on. They readily waft out of our grasp and with so many pressing issues, we tend to easily give up their pursuit. They are the little sins, different for each of us, but they appear like small bits of dust on the corrective lenses (discernment) of our life. And like real glasses, before too long we are surprised at how dirty things have become as we have slowly gotten used to the encroaching problems because each spec appeared so insignificant. However, eventually our vision (discernment) is impaired. You see, even little sins when allowed to grow, eventually bring with them death (James 1:16). Our dust bunnies can easily grow into dust bears.

Astronomers have known about cosmic dust bunnies for a long time. These surprisingly complex collections of cosmic dust populate many galaxies and Hubble has exposed their presence for us all. The giant elliptical galaxy NGC 1316 has extensive lanes of cosmic dust that astronomers believe is the residue of a collision of two galaxies which formed the current one. 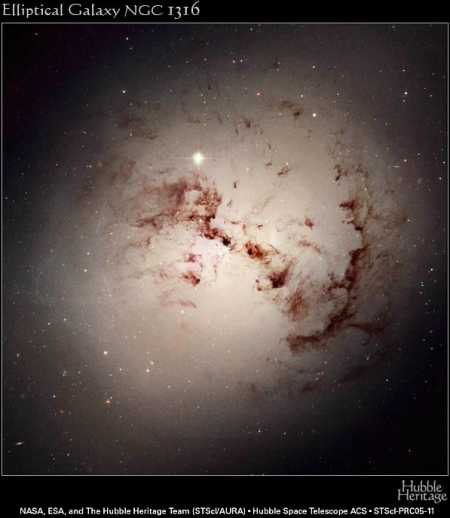 Some interesting facts about dust bunnies. You can find the full resolution pictures here.