Echoes occur when a source is reflected by another object. The most common experience with echoes occurs when sound bounces off the walls of a large space such as a canyon or even the interior of a large building like a cathedral.

Echoes are secondary, slightly altered versions of the original. The reflecting object “colors” the original, imparting some of its own characteristics into the mix. Less commonly noticed are light echoes. These occur when light bounces off an object before proceeding on to our vision. In a strict sense, almost everything we see are light echoes, an original light source bouncing off an object and reflecting back to us. This bounced light both gives us a view of the object and affects other objects by how its reflective properties “color” the scene. Photographers are very familiar with this reflective coloration, which often gives an overall cast to the color of a photograph.

When something emits light, the direct light arrives first and the reflected light arrives later (it has a greater distance to travel), overlaying the original source. While in normal photography this disconnect is fantastically short, in astronomy, the time between the arrival from the two sources (original and reflected) can be considerable, because of the distances involved.

Today’s Hubble pictures are from V838 Monocerotis, a star over 20,000 light-years away from earth. In 2002, this star suddenly increased in brightness to an equivalent of over 600,000 times brighter than our own sun. While no one is sure what exactly caused this flash of brightness (it was almost like a stellar photoflash going off), it has had an interesting effect. The Hubble captured the original flash and since then has been capturing echoes of that flash reflected off the interstellar dust surrounding the star (many light-years away). Our first picture was taken in November 2005 and the second a month ago in September 2006. Notice the subtle but significant differences as time goes on. The central light source has dimmed and the surrounding dust clouds are revealed in much greater detail as more and more reflected light reaches us. 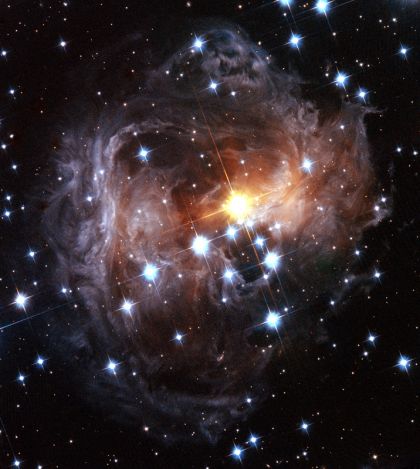 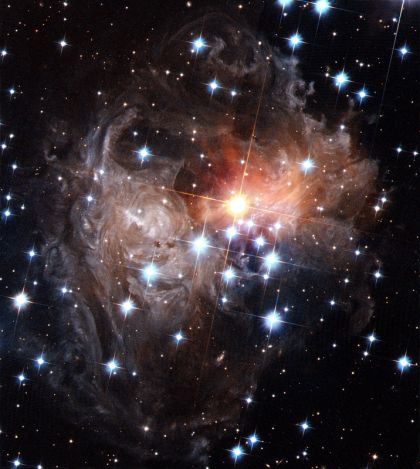 You can find higher resolution images of V838 here.

My point for today is that this colorizing and defining effect of echoes is not limited to sound or light, it also works in the realm of ideas and truth. In a way, we each reflect the light of God that illuminates every one of us (John 1:9). In addition, we take that light that was given to us, God’s revealed truth (the Faith once delivered – Jude 3) and reflect it off our lives by what we say and what we do. Like all reflected light, it is colored by the object it bounces off of. The question we have to ask ourselves, especially the Christians among us, is how faithfully do we reflect (echo) that source versus how much do we color it, either intentionally or unwittingly (but always revealingly)?

Jesus told his disciples to judge people by their fruit, and one way to do that is to ascertain how accurately they reflect the source that they claim guides their lives, especially over time. Just like the light from V838 Monocerotis illuminates the contents of the interstellar dust it bounces off of, revealing more detail over time, the light of Christ illuminates the contents of our lives as it bounces off our souls and our actions, illuminating the thoughts and intentions of our hearts, with increasing detail over time.

We reveal ourselves in the echoes we send abroad. What are you saying to that great cloud of witnesses (Hebrews 12:1) who surround your every action, to those who see you every day at work, at home, at Church, at play? Think about it.

May God richly bless your reflections and may you mirror the love and truth of Jesus Christ in all that you are and do. Amen.