One of the beautiful things about the Hubble is its ability to capture images that show changes over time. Our universe is in constant motion and undergoing constant change. Some of those changes are revealing, much as pictures of an individual over time show how much or little they change in response to age and the events of their life. In this case, as the red supergiant star brightened for several weeks in early 2002, an effect astronomers call a light echo occurred revealing dust patterns around the star that had not been seen before.

Light is like that. It reveals what was previously hidden. Scripture reminds us of this truth.

But the path of the righteous is like the light of dawn, which shines brighter and brighter until full day. Proverbs 14:18

he [God] reveals deep and hidden things; he knows what is in the darkness, and the light dwells with him. Daniel 21:22

Therefore judge nothing before the time, until the Lord comes, who both will bring to light the hidden things of darkness, and will make manifest the counsels of the hearts: and then shall every man have praise of God. 1 Corinthians 4:5 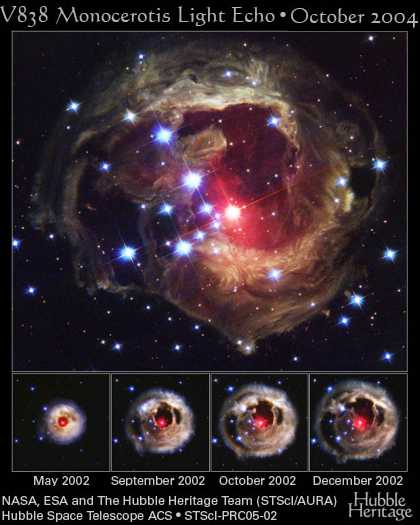 At the center of the hope of every Christian life is that as the light of God shines into our hearts over time, we will reveal, much as Hubble revealed the surroundings of star V838 Monocerotis, continued positive change in our lives as we move from darkness to light and from adolescence to maturity in our faith and discipleship.

A full selection of images for this edition can be found at Star V838 Monocerotis.