NASA announced today that it has approved a final servicing mission to the famous Hubble orbital astronomy instrument platform. The Hubble “Telescope” is really a platform of separate astronomical instruments, which include: 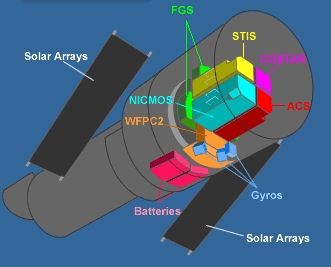 COSTAR – Corrective Optics Space Telescope Axial Replacement – Second-generation corrective optics. The COSTAR is not an actual instrument, but a set of mirrors, which refocus the spherical aberration in the primary mirror for use by the FOC.

NICMOS – Near Infrared Camera/Multi-Object Spectrometer – Second-generation imager/spectrograph. NICMOS is Hubble’s only near-infrared (NIR) instrument. To be sensitive in the NIR, NICMOS must operate at a very low temperature, requiring sophisticated coolers. Problems with the solid nitrogen refrigerant have necessitated the installation of the NICMOS Cryocooler (NCC) on SM3B to continue its operation. 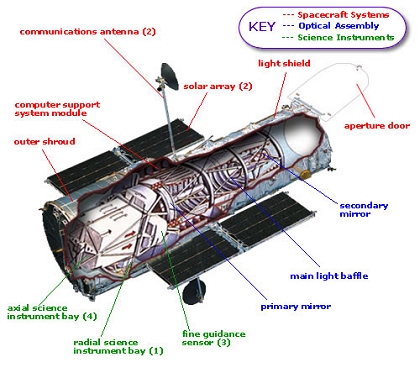 The 11-day servicing mission will include two new instruments: the WFPC3, which is sensitive across a wide range of wavelengths (think colors), including infrared, visible and ultraviolet light. It will increase Hubble’s sensitivity by a factor of 100, improving Hubble’s view of dark matter and the farthest and earliest-formed galaxies.

The second new instrument is the Cosmic Origins Spectograph, which will measure the structure and composition of the ordinary matter in the “cosmic web” (intergalactic gas and long, narrow filaments of galaxies) that sits within hugh voids in the universe. To “see” this matter, the COS will use the light of distant quasars whose faint eminations will work like “cosmic flashlights” as their beams of light pass through the cosmic web, spectrographically fingerprinting the material.

The existing Space Telescope Infrared Spectrometer (high resolution instrument for visible and ultraviolet light studies of star systems and distant galaxies) which failed in 2004 would be repaired, upgraded and put back in service. Not designed to be serviced in space, engineers had to figure out a novel way to deal with the more than 100 screws holding the instrument in place.

In addition, the crew will replace batteries (they can only be recharged so many times), install six new gyros to align the pointing mechanism, and coat the outer shell with a new stainless steel blanket to protect the instrument bays.

One last and important objective will be to attach a SCM (soft capture mechanism) to the aft bulkhead, which will enable a safe de-orbit at the end of Hubbles useful life. With such a large object (24,500 pounds), it is important guide the platform into a safe controlled re-entry path, preventing damage to any inhabited area.

One of the many Hubble support crew, Dr. William Clement, is a longtime friend who has been working on this mission for some time. Will is a unique problem solver. A Naval academy graduate and former Marine helicopter pilot, he is a physicist by degree, but an engineer at heart who enjoys tackling the impossible. A devout Christian scientist, he has no problem reconciling his faith with his science. I would say that he has his a prioris on straight… 😉