I love how scientists anthropomorphize the physical universe, so that stars that are going through their last stages of being a star are characterized as “dying.” Yet, who knows? I love how C. S. Lewis looked at the issue in The Voyage of the Dawn Treader in his Narnia series. I covered this in my earlier posting on Dying Stars, but let me quote it again here.

In The Voyage of the Dawn Treader, C. S. Lewis’ Narnian tale of a journey to the edge of the world, Eustace views stars as a scientist would: “In our world,” said Eustace, “a star is a huge ball of flaming gas.” But, his companion Ramandu reminds him, “Even in your world, my son, that is not what a star is but only what it is made of.” (page 226)

Life in our current universe, the one subjected to futility as Paul puts it, eventually leads to decay and death. Stars, powerful as they are, eventually run out of energy and begin to loose their “starness.”

Below are several example of stars in their last stage of existence, when they become what we call planetary nebulae, or luminous gaseous clouds created as the stars cast their outer layers into the space around them. While full of energy, most stars appear much the same though at different levels of power. Now, however, when they facing their end, their uniqueness shines out for the whole of creation to see. 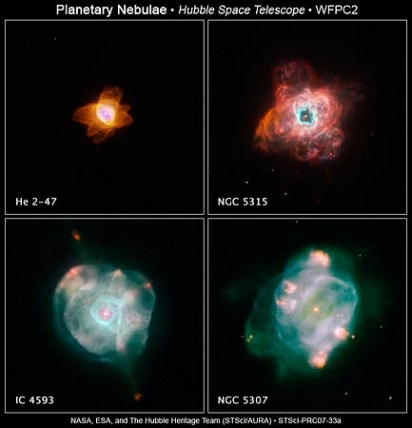 Yes, Eustace stars are made of huge balls of nuclear fusion, but beyond that their uniqueness eventually shines through.

One day, I expect to know not just what these stars are made of, but what they really are within the economy of God. And, when I meet my first star I will apologize for all my brethren, for how we subjected them, along with all creation, to futility due to our sin.

Other sizes of this image are available here.