A lot of the Hubble pictures have been given catchy titles by either people at NASA or by the various societies or press who cover and disseminate the Hubble catalog. Todays selection, the Sombrero Galaxy, is a spiral galaxy in the constellation Virgo, sitting about 28 million light years from earth. The thing that sets it apart from other galaxies that are easily visible from earth is its large, bright core, which is enhanced by a huge central bulge surrounded by a prominent band of dust giving it the appearance of a galactic disc. Viewed from Earth, we see this galaxy on its edge, giving it the appearance to many of a sombrero (a large straw or felt hat with a broad brim and tall crown, worn especially in Mexico and the American southwest). It is relatively bright with a magnitude of +8. That makes M104 (its official name) visible even through a small telescope.

The Bible doesn’t have a lot to say about hats, except when suggesting that the sons of Aaron should have fine hats made for them: “And you shall make hats for them, for glory and beauty.” Exodus 28:40b. I can think of no more glorious or beautiful hat in all of God’s creation than the Majestic Sombrero. 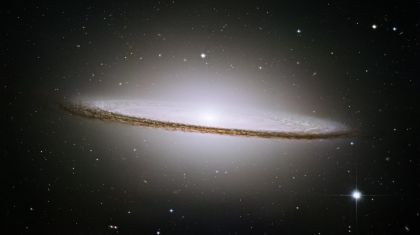 You can download the full image here. May the Lord bless and keep you today as you ponder the wonders of his creation.