Looking back at The Eye of God shot I posted on Sunday, I decided that it would be fun to present a series of Hubble shots over the summer. So each Tuesday I will put up another selection. Scripture tells us “The heavens declare the glory of God; And the firmament shows His handiwork” (Psalm 19:1). Well the Hubble has given us a chance to really see that glory and handiwork up close (relatively speaking) in a way that was formerly hidden from the eye of man. 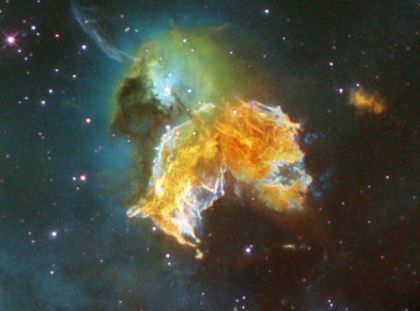 Supernova Remnant N 63A Menagerie: The Power of God

This photo is the remains of a massive star that exploded in a star-forming region in the Large Magellanic Cloud (LMC). Supernovas are the most powerful ongoing events in the universe and demonstrate the awesome power of God. Their aftereffects remain visible long after they occur. Whenever God moves in a mighty way, the results ripple through time and space leaving their footprints long after the event.

You can download various sizes of this picture here, including ones suitable for your desktop. Note: I cropped the original image so you may want to frame it differently.

2 comments for “Hubble Tuesdays: The Power of God”