Various things can cause a person to see double and certain conditions can cause that number to increase. I have an old friend who always see everything double, but over the years has learned to live with the problem. Visually those are just duplicates, not different versions of the original.

Hubble astronomers have a slightly different problem. In viewing the multiple images of this quasar in Leo Minor, roughly 10 billion light years away, which one is the real quasar? They all are but because of the effects of the gravitational lens produced by an intervening galaxy cluster, each image is slightly different, giving multiple views of the same object. 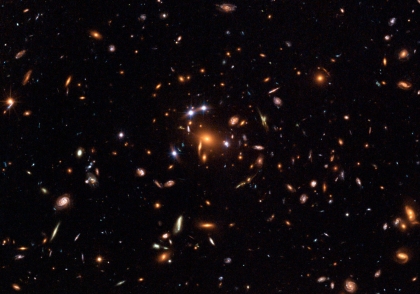 Original image with four duplications of the original quasar 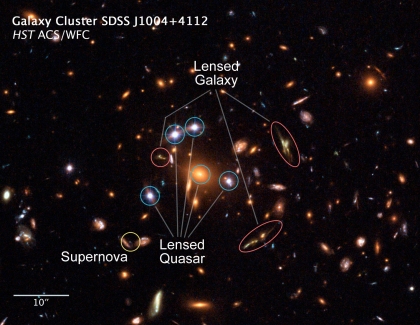 Annotate image to show each of the duplicates 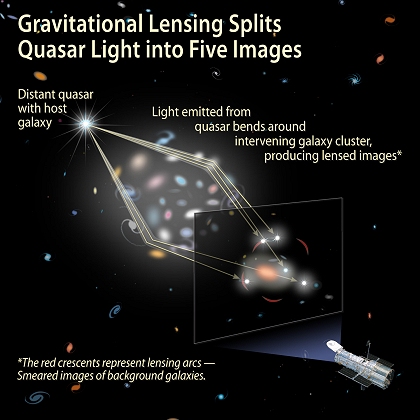 Explanation of the lens effect

You can see the original images here.

There are many examples of this type of duplication and subtle distortion in our everyday world that while not visual are similar. Information, whenever it passes through a powerful lens, such as the our individual thought processes, comes out the other side slightly changed, even when we try not to.

This is very important in religious considerations, since the inspired text, while it may not change, its translations and interpretations do. A person trying to understand Christianity today sees its image transferred through many powerful lenses, many of which show versions at odds with each other.

For Hubble to get a clear view of the quasar it would have to shift its position and find a line of sight not affected by any intervening gravitational lenses. For an explorer of Christianity to do likewise, they would have to find the best original source text of the scriptures and learn to read the original language. Not quite as impossible as moving the Hubble the light years required for an unaffected view, but for the average person, almost as difficult.

So what does one do? Like the Hubble astronomers, we look at at all the available images [translations] with a discerning mindset and use that understanding to try and cancel out the distortions [private interpretations] to arrive at the actual image [original meaning]. No mean task, but one well worth the effort.

For more thoughts on this subject see my earlier post, The Problem With Bible Translations.