In Genesis, God tells us that in marriage, man and woman are destined to leave their past behind (represented by their parents) and become one flesh. Looking back on my own married life, now approaching thirty years, I realize that while I accepted that on an intellectual level, I have resisted its fundamental reality.

In today’s Hubble picture we see the merging of two galaxies (they are called the Antennae galaxies). Eventually these two galaxies will become one larger galaxy, but in that merging something significant happens; billions of new stars will be formed. Not only will the existing stars merge but new ones are and will be created, unique to the merging process. Much of what the galaxies were before they merged will change. 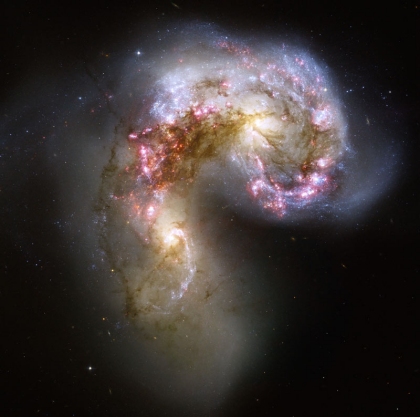 The merging of the Antennae Galaxies and new star creation

When two people come together in marriage, it is more than the merging of two distinct personalities, it is the creation of something new and there is a necessary changing of what was; the link with the past is broken. You can never go back to what you were before the merging began. As my wife and I have looked back over our marriage, we realized that as that destructive-creative process would begin, we would shrink back from it, which initiated a long, and until recently, ongoing pull me-push me process.

Two things were occuring: we wanted to stay the same, to be the persons we had always been and in a way were afraid to become the new people that marriage demanded. We also shrank back from the pain inherent in that destructive-creative process. But just like the force of gavity that pulls galaxies together, merging and changing them, love and Christ have continued to pull us together until we have at last begun to give in to what marriage demands, to merge and change.

It is not that we lose what or who we were, marriage is not a zero sum game; it is that we are being transformed into what and who we were meant to be, still retaining the best of what was but now becoming a new and wonderful creation. It is similar to the born again process of becoming a new creation in Christ.

Thank you God for being patient with us all these years while we, with your help and sustenance, worked this out.

Click here for full size images from the Hubble site.