Over the years, various theories of the creation of the universe have attacked Judeo/Christian theories of origins. The first generally supported theory was Fred Hoyle’s steady state model, which argued against a beginning point. It said that the universe had been relatively the same throughout its existence. This argued against creation at a point in time and therefore against biblical origins, which said God created the universe at a single point in time.

When the Big Bang theory came into vogue, with the idea of the universe having a starting point in time, the next issue was whether or not the mass of the universe would cause it to eventually stop expanding and collapse in on itself. It was argued that this would happen because of the gravitational force of the ubiquitous dark matter, which though unseen except by its gravitational effects, vastly outnumbers regular matter. It was argued that dark matter’s gravity would force the universe to collapse in on itself and another Big Bang would occur, starting the cycle all over again. This would support non-Judeo/Christian cosmologies, such as Hindu cyclical reincarnation. The universe, like souls, reincarnates on a regular cycle.

However, recently scientists have discovered an even more powerful dark energy. This came out of the study of supernovae by new instruments such as the Hubble. Rather than slowing down, the expansion of the universe is speeding up. This is because dark energy, which is fueling the expansion, is estimated as composing 70% of the universe.

The simple explanation is that the universe described by the Big Bang is a one-time unique event, starting from a gravitational singularity (a single point of infinite density) and expanding into what we now see. It had a unique starting/creation point. It allows for God as the creator and does away with the cyclical universe. The chart below details the relative sizes of the different constituents of the universe. It is followed by Hubble images of supernovae that have helped establish the increasing speed of expansion and the extent of this dark energy. 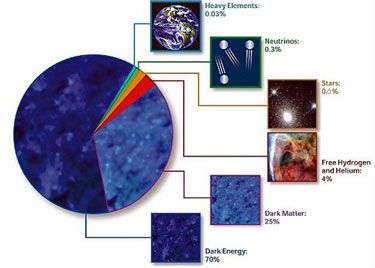 Additional images and explanations can be found here.