My wife has always thought of me as her hero (thank you my love!). She also has told me since we first met that I have a knight complex, that I am always ready to rescue damsels in distress (I sometimes rescue men in distress too, or maybe I should say I help them with their problems – just ask my neighbor). I have replied that I just like to help.

Well, this morning I ran across one of those ubiquitous polls we see these days, that helps you determine that if you were a Superhero, which Superhero would you be. 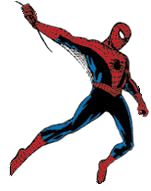 It turns out that I am Spider-Man, and not just a little bit Spider-Man; I fit 95% of his characteristics (not including web shooters in my wrists or that useful spidy sense).

Peter Parker is someone I can relate to. Though I grew up a relatively successful athlete, I was still a nerdy/geekish (for the 60’s) outsider. I didn’t fit very well into any of the clicks or groups at my high school. Instead, the friends and associates I did have came from across the entire spectrum of the student body. There was a certain freedom in that, but also a sense of loneliness. Yet even then, I was trying to rescue people, though at that time the female side of the aisle was my primary focus.

Looking at Peter Parker and Spider-Man there is one quote that typifies the angst of his existence and it resonates with me as a Christian:

Every Christian has tremendous power. Jesus said that the least in the Kingdom was greater than all who had come before. As Christians, we are filled with the life of God and typify the creator to those around us. To use an Eastern Orthodox way of saying it, as Christians we are all icons of God to the world in which we live. Not being able to see the invisible God of Judeo/Christianity, and with Jesus ascended until the time of his Second Coming, we are the image of the Father, Son, and Holy Spirit to those who are lost. It is our fruit, the actions and character of our lives, that demonstrate not just whether or not we live what we say we believe, but validate the efficacy of that belief to all who come into contact with us, and in that the reality of the God we say we serve.

The power of life and love is the greatest power in all of human history and we possess it as Christians. Because of that, we bear great responsibility to exercise that power in ways that give life and shower love everywhere we set our feet or leave our mark (I have places like the Internet in mind here). My Christian brothers and sisters, take up that responsibility, shoulder the burden, because the power is already part of you. Be worthy of the life that lives within you.

Click here to take the “Which Superhero are you?” quiz…

P.S. Talking with my wife just now, I realized that both Peter Parker and I are photographers. So we share something that was not even part of the Superhero quiz. If you are interested in my photography, you can see it here.