This post has been updated/corrected with information from someone who was there (see the end of the post for the email I received from Navy Hospital Corpsman 3rd Class Zachary John Impastato).

Images give substance and focus to our thoughts about events. Some images come to define specific moments in history, searing their impression on the cultural memory so strongly that when remembering the time, it is the image that we see.

In World War II, U.S. soldiers’ sacrifice and triumph was epitomized by the famous photograph of the raising of the flag on top of Mount Suribachi at the southern tip of the island of Iwo Jima on February 23, 1945. This Pulitzer Prize-winning photograph by war photographer Joe Rosenthal is one of the indelible images of the war. It has since become memorialized in a statue at the U.S. Marine Corps War Memorial dedicated to all of the personnel of the U.S. Marine Corps who have died in the defense of the United States since 1775.

For many Christians, one image from the fight for Fallujah during last year’s invasion stands out above all others. An unidentified AP photographer caught a group of Navy corpsman, who were supporting 1st BN 5th Marines, praying over their fallen Lieutenant who had just died. 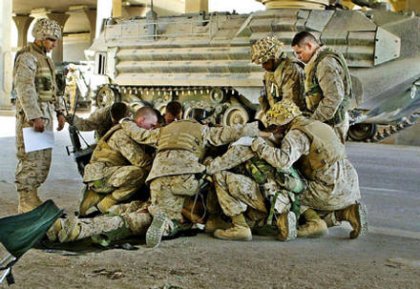 Update: The story of the Navy Corpsman who died, as told by his girlfriend.

Today, Luis Sinco, a Los Angeles Times staff photographer embedded with the Marines in the assault on Fallujah, took a picture that has come to define the American soldier in the war in Iraq. Dan Rather was so taken by the picture that he closed his CBS News broadcast asking his viewers to contemplate not just the picture, which CBS news filled the screen with, but the man behind image. 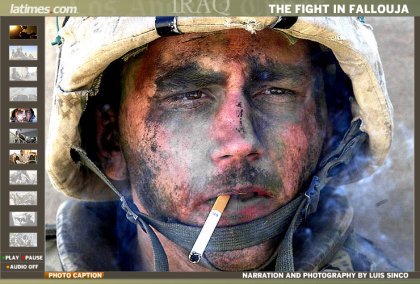 You can see information about this soldier in an LA Times story. He is identified as Marine Lance Cpl. James Blake Miller.

As a Christian, the images from Iraq help me to focus when I pray for the men who are risking their lives at this very moment. At least for me, it is easier to pray for the soldiers who I can see in the photos. The images give substance to my efforts. While the man in Sinco’s photo is not identified, because I can see him I am able to pray that he makes it through this trying time and is able to return home to his family.

I would suggest that when you see images such as these, you don’t just look and then move on, out of sight, out of mind. Instead, I propose that you use the opportunity to pray for the people you see in those photos. Why not redeem the time, as they used to say when I was a young Christian?

With that in mind I now pray: Grace and peace be with you young soldier and may God protect you on your journey, a journey that I pray eventually ends, after a life well-lived, in the everlasting arms of our Lord and Savior, Jesus Christ. Amen.

Update 5 August 2015: Here is the letter I received on 5 August 2015 from Zachary Impastato about the Navy Corpsman.

I came across your picture and the story. (https://beyondtherim.meisheid.com/?p=221)

My name is Zach and am pictured in this. I am the fist sailor on the very left leaning of our Lt. who sustained a fatal GSW and fell to his death. He died in sacrifice for his men. You mentioned this was in the fight for Baghdad. This was not, this event took place in Fallujah Iraq during the first assault involving 1st BN 5th Marines. I am now out of the military and have suffered for almost a decade with PTSD and moral injuries. In this picture i would like to also point out that almost all those people are sailors. Navy corpsman who serve as front line combat medical practitioners with Marine corps infantry and support units. We are the quiet few that many do not know about. The Doc that marines cry for in combat. I wrote this letter i am about to attach many years ago in hopes to clarify for family what this picture was. I am not a skilled writer such as your self, so please be generous. I just thought as one professional to another you would want to represent yourself and my brothers in arms accurately in your stories. I am currently in seminary myself looking to become a chaplain within the VA medical system. Thank you for your time.

The letter I sent to family and friends…

“This photo appeared in several places early April, with the caption, ?U.S. Marines pray over a fallen comrade at a first aid point after he died from wounds suffered in fighting in Fallujah, Iraq, Thursday, April 8, 2004.?  This tale and picture can be seen on the Washington Post, LA Times and Indy Star to name a few. While it tells of a poignant moment experienced by our Marines, it does not tell the whole story.

Redirect you attention to the men kneeling around the fallen Marine. These are the silent, unsung heroes of the US Navy. We are the US Navy Corpsman! Yes, a sailor! As we have, for nearly 106 years, US Navy Corpsmen have served alongside their Marines, sharing the risks of battle, the pains of loss, and the joys of victory.” (from the article) This was under a cloverleaf in Al Falluja just east of Baghdad.

I want you to notice the members from left to right kneeling around the Marine. (Myself) Hm3 Impastato,  HM3 Bollinger, HN Smith, HM3 Williams, HM2 Davila (standing with out a helmet) and HM1 Cabarloc next to him. Who you do not see is the US Navy Doctor LT Wilkes kneeling. What you see are US Navy Corpsmen and Doctors attached to different units and missions with in the Marine Battalion here in Falluja gathered at one spot doing one job. Saving lives!!! Some lived at this location for a great amount of time while others were spread with their own individual units all over Fallujah, all with one mission; saving our marines, and fighting next to them in battle.

As you go about your daily business, take a minute out of your day to remember and say a quick prayer or good thought about the members of the sea services. Let us not forget, that the service and sacrifice of our Marines and Sailors are not confined to the conflicts of distant history.  It is lived out each day around the world. This I know because I am there, we are all here.

Many of us have not seen our families and loved ones in months to some even almost a year. Others have not been able to communicate with the exception of 3 to 6 week old letters to and from the states. And there are some who will never talk, see or write their families and loved ones ever again. Remember this as you here about the fighting and violence anywhere in the world. Remember that it is our family and our fellow Americans out there doing a noble service. Marines and Sailors sacrificing some, some sacrificing all!!!!!

You can help support us everyday by saying a prayer for all the families and friends of everyone out here and especially for those who have fallen. Say a prayer for the Iraqi people who are trying to start a new country free of terrorism and fear. Say a prayer for the military members out her, out there out anywhere. Perhaps you know a person in the military or a family member of a military member! Simply take the time to let that person(s) know that you appreciate not only the sacrifices and bravery of their loved ones, but appreciate and empathize with the sacrifices and bravery they have to face everyday as scared and uncertain news is relayed about there loved ones situations!

Many Americans do not agree with what the government is doing here and our president?s policies and decisions. I also understand that people burn our flag and send protest letters to officials and the military. On the other side of that spectrum there are many who support and love us. I would like you to keep in mind however; those of you who protest the events of the Middle East are able to do so because of these many who are out here. It is the US military that has fought, bled, sweat and died for over two centuries to give you the freedoms that make America so great. It is the US Military member that serves their nation, leaves there families, salutes the Flag and dies in battle so that US citizens and their families have the right to burn that very flag, deny and despise our very service, and protest that same government we honorably and bravely serve.

In closing, remember everyone who serves in the military! Weather it be over seas, in combat or within the United States; they all have there important parts and all serve you and fight for your freedoms! Pray for them, pray for us!!! Do not forget that all your freedom and our freedom has come with great price?

Thank you for your faithful story and prayer…
Respectfully Yours, Zachary J. Impastato