When I got home from work tonight, my wife told me there was a deer laying in a hallow near the old tree stump on the edge of the stream that flows through our back yard.

Being a photographer I grabbed my camera and decided to try and get a few shots of the animal before it ran off. As I got closer, however, it did not attempt to leave and when I got very close, it was obvious something was wrong. It seems there is a sinkhole next to the stump and the deer had stepped into it and broken its back leg.

I found this out by trying to help her get out of the hole. We got a long 2X4 and I lifted her rear end, hoping to give her the leverage to get up out of the hole. She tried to move but couldn’t get up, even with my help. It was then we discovered that her left rear leg, in the hole, was broken in two places.

We called the authorities and a police officer came out to verify the situation and called Animal Control. She looked exhausted and while we were waiting she died.

There was nothing I could do and though I wanted to help, I only was able to expose the extent of the problem. It is like that sometimes. No matter how hard we try, or want to assist in a time of need, there will be those occasions when there is nothing we can do. We can only observe the events as they happen. It is frustrating, but that is often the way it is.

She was one of God’s beautiful creatures. 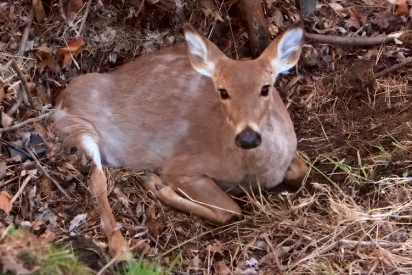