If you are a born-again Christian then you have little choice but to resist. Romans 12:1-2 says, “1I appeal to you therefore, brothers, by the mercies of God, to present your bodies as a living sacrifice, holy and acceptable to God, which is your spiritual worship. 2Do not be conformed to this world, but be transformed by the renewal of your mind, that by testing you may discern what is the will of God, what is good and acceptable and perfect.”

Do not be conformed to this world. It can’t much clearer than that. It all comes down to choices, the decisions we make throughout our day. Following Jesus, taking up our cross, is a lonely narrow road, usually filled with hardship and testing. When I became a Christian during the Charismatic Renewal of the 70’s, it was a popular belief that coming to Jesus solved all your problems and life would be easier. In a way that is true, Jesus did begin solving my problems and some thing did become easier but the easier parts were in the minority and have been ever since. Discipleship and the pursuit of holiness is a hard taskmaster and I am often reminded of Hebrew 12:6 “6For the Lord disciplines the one he loves, and chastises every son whom he receives.” The Greek word translated chastises actually refers to scourging with a cat of nine tails.

To pursue Christ is an arduous task for the closer you get the harder it becomes. That is not unique. In any area of human endeavor, the better you try to become at something the harder you have to work at it and the more difficult/painful the effort becomes. Why should discipleship and the striving for holiness be any different? That is rhetorical; of course it isn’t. You want something you are going to have to work for it. J.I. Packer understood this when he divided Christians into porch sitters and travelers on the road in his book Knowing God. The painful struggle is on the road, not sitting on the porch watching.

As Christians, we generally have had it very easy in this country for a very long time. That appears to be ending. Hard times and hard choices are coming. It will be easier for those trained to make hard choices, who have struggled down the road of discipleship for some time. If that doesn’t describe you, I suggest you get moving and get prepared because facing up to all of this cold will be an arduous task. 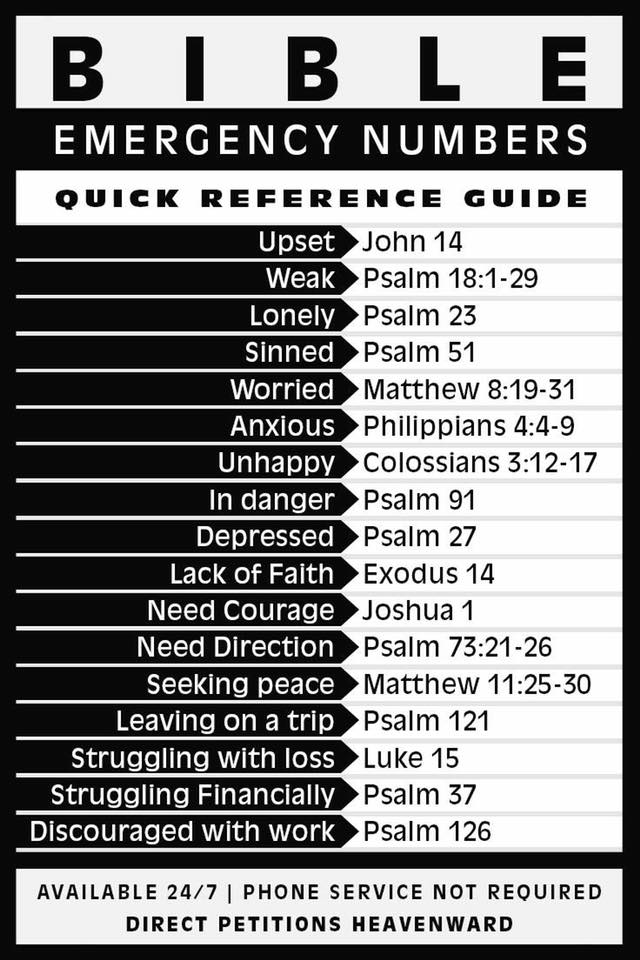 Be a spiritual prepper and get your soul ready for what is coming. Memorizing at least the gist of a few important scriptures is a good starting point. Here are a few for you to begin with and why they are important. As the image says, these are emergency numbers/scriptures no Christian should be without.