We have owned three Akitas, a Japanese breed introduced into the U.S. after WWII. Orignally bred to guard the Emperor and protect villages from bears (three Akitas have brought down a marauding bear), the enigmatic large breed is powerfully built and intimidating to those unknown to the dog.

Most strangers are a little unnerved when meeting an Akita for the first time. Their general reserve often appears as dangerous calculation in such a large, strongly built dog. Even vets, who have had long and extensive experience with Akitas, are reticent. Our vet, a middle-aged woman, would not let her children near an Akita until she met our first dog, Simon. A brindle who was a rescue effort, he was gentle personified, until…

One afternoon, when my daughter was still in middle school, she had gotten off the bus and was walking down the street in front of our house. I often let Simon out the door to greet Sarah and on that day one of the neighborhood boys took it on himself to give her a hard time. He began smacking her in the back of the head by flipping his extended hand back and forth, something boys sometimes do to girls when they are feeling especially impish.

Before I could restrain Simon, he was out the door and in three loping bounds had made the street, and, despite his utter hatred of being up on his hind legs, put both paws across the back of the boys shoulders and proceeded to give him a quick ear piercing. It all happened in about three seconds. Simon then put himself in a guard position between Sarah and her tormentor, who after the initial shock wore off, ran down the street toward home screaming bloody murder.

Fortunately for us, the boy’s mother, with the testimony of his sister who had witnessed the complete event, said he deserved it and in the future maybe he would think twice before tormenting girls again. After that, Sarah had no problems with anyone in the neighborhood harrassing her and we knew first hand how protective Akitas could be of their beloved charges.

When it came time to put Simon down, our vet took it as hard as we did, almost unable to give him the injection, she was sobbing so much. She cried harder than any of us, but despite the pain of loosing such a dearly loved companion, we were sold on Akitas.

Our current dog, Clifford (yes, he is named for the dog in the childrens book and yes again, he was also the runt), is another brindle and I flew home with him from Arizona when he was nine weeks old. My wife was working on a contract in Phoenix and we got him from a co-worker, so we knew his breeding.

My daughter decided this one was going to be her dog, so from the moment I got home she took control of his every need. For about twelve weeks, until he was fully housebroken and had completely imprinted on her, he was never more than a few feet away from her. Most of the time he was in her lap. While it did put a crimp in some of her activities, that did not deter her dedication. She took him to her college classes; she slept curled up around him; he was simply loved into the family. It shows. He is a big teddy bear.

Our vet loves him and he loves her, giving her big wet kisses whenever we take him for a checkup or shots. He is one of her favorite dogs. But, below that extremely loving surface, sits the same protective instincts that pushed Simon into action years earlier. While nurture has made Clifford a lovable, cuddly bear of a dog, and even moderated his natural aloofness, he is still an Akita. There have been moments when he has reminded us that we are his solemn charges and he will protect us with his life.

What is my point? Love can moderate nature; it cannot change it. I believe that is why Christian theology makes the biblical point that to become a child of God we must be born again. We must become a new creation, the old must pass away. Love, education, training, all of the things that make up civilization, can moderate our old sinful nature, but they cannot change it. The old man will forever be the old man. As for me, I have become a new man in Jesus Christ and I thank God for that, but I can still see, just under the surface, the sinful nature ready to assert itself.

So, the next time you get in a discussion with someone who believes a little moral cosmetic surgery will take them all to the good, remind them of our Akitas and Gods biblical demand that we be born again.

Grace and peace and may God grant you, if you have not already experienced it, the gift of new birth, so that the better you will be real and not just love covering up the old man.

While Clifford does not like having his picture taken, these should give you a good idea of what he is like. 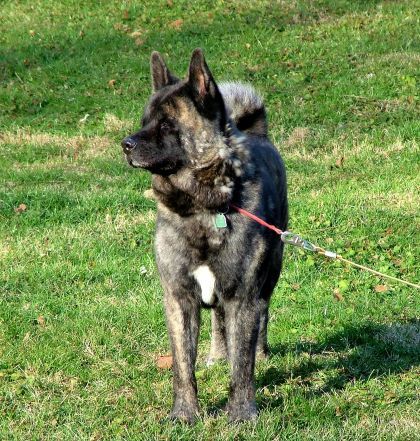 Clifford at his on-alert best. 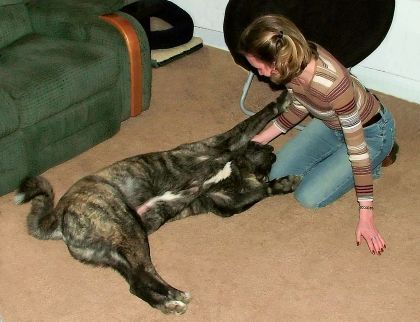 My daughter with Clifford at his playful best. 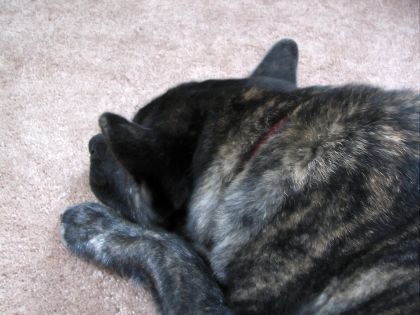 3 comments for “Nature vs Nurture: The Clifford Experiment”