I have been a fan of several cartoon series over the course of my life. One of my favorites has been Calvin and Hobbs, the story of a little boy (Calvin) and his stuffed tiger (Hobbs). Some of its strips serve up admittedly deep concepts in the guise of a quick laugh. For example: 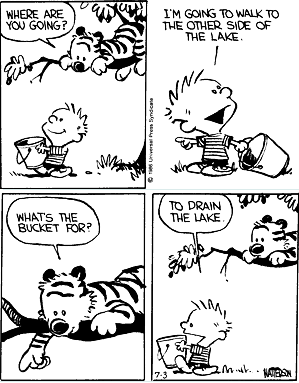 Small boys aren’t the only ones whose ideas are much too grandiose for reality.

There is a legend about Saint Augustine, who was contemplating the Trinity one morning while walking along the beach. He noticed a small boy who had dug a hole in the sand and taking his little bucket was furiously transferring water from the ocean into his hole. When Augustine asked him what he was doing, he said he was putting the ocean into his hole, a bit reminiscent of the comic above. Augustine tells the small boy that what he is doing is impossible, his hole is too small for the ocean. Upon hearing the explanation the boy responds that Augustine has the same problem trying to understand the Trinity and then disappears.

It is one thing to dream and quite another to make erroneous assumptions. Within our Christian lives, we often do similar things to Augustine and Calvin, but without the corrective influence of angels or the safety of cartoonhood.

Whether it is allowing our feelings to selectively define our use or interpretation of God’s Word (common for new and immature believers) to the more serious issue of allowing extra-biblical a prioris (fundamental assumptions) to slant our understanding of scripture and its commands (these can be supposedly good things like denominational distinctives), our biggest concern should be to make sure we treat the Word with honesty and humility, while rightly dividing the word of truth. It is not profitable to study to show ourselves approved if while doing so we distort, misappropriate, or otherwise misuse, even unintentionally, that which we are studying.

Job and his counselors had to deal with this issue. Job wanted answers from God, while his counselors thought they already knew what was what. God told Job to trust, it was not for him to know everything that he wanted answers about and called him to sacrifice for his friends (thereby saving them from God’s wrath) for their presumptive error.

Whether we are using our bucket to try and know more than we should or can, or to carry around our presumptive errors, we should instead be humbly realistic about our limitations and aspirations. God will answer our questions if we listen and are willing to be told, along with the answers we seek, thus far and no further or back up, your foundations are shifting sand, not the rock of truth.

2 comments for “Out of the Mouth of Cartoons”