Most people have either seen or heard of the television series The West Wing. Well yesterday, due to the fortunate occasion of my daughter knowing a Secret Service agent, we got a private tour inside the fence of the area surrounding the White House, including the West Wing. Tours of the actual White House itself are extremely limited at this time, though we did see the kitchen and lower entrance area, including the original foundations. The first thing that struck the five of us being guided around the inner sanctum of American politics was the size difference between the real and the imagined. On the television series everything is open with large hallways, glass everywhere, great sight lines, and plenty of space. In reality everything is narrow, small, and cramped, with both people and furniture stuffed into very limited spaces. Even the press briefing room has a claustrophobic feel to it and is surprisingly small. The only room that had a sense of spaciousness to it (even then we were surprised how small it appeared) was the Oval Office. Standing in the hallway outside, one wonders if the cramped corridors would pass current building codes.

When you step out into the covered portico connecting the West Wing to White House, the area known as the Rose Garden, you are again struck by how it is less than you imagined. Not that it isn’t well landscaped and pleasantly laid out, it is. However, like the spaces within, without is also smaller than expected. Some of this comes from the foliage and trees that seem to hem everything in, reducing sight lines that might compromise security. But, rather than feeling large and expansive, it feels intimate and contained.

The White House and its surrounding structures is, after all, a true house, built in earlier times with a more limited sense of spaciousness. Houses built today seek a sense of openness and free sight lines. Not here. The Ship of State has a lot in common with a real ship, with the corridors and staterooms of power being confined and cramped. After thinking about it, I liked that. It is fitting that our president and his staff work in spaces of modest proportions, allowing at least the architecture to impose a sense of limits.

We were constrained and could not take pictures in a lot of areas, with almost nothing inside the buildings being photographable. However, to give you a feel of how the president makes his way to his office on a good weather day, below is a picture of the exterior entrance from the Rose Garden into the Oval Office. This small walking tour will be something I remember for a long time. 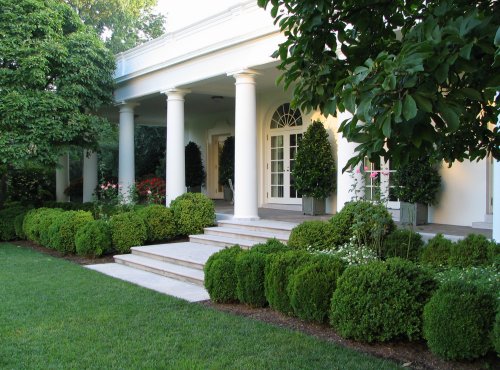